My first HF radio was a Yaesu FT-450D. This set was perfect to introduce me to the major amateur radio bands, major in the sense of “long distance”. I had acquired it by taking advantage of a promotion that offered the SCU-17 digimode interface. This duo is great, because it makes it quite easy to implement an environment that seems, at first sight, rather complex. I was able to discover and abuse PSK31, HellFeld, FT8, MFSK modes for a few years. And it’s cool when you’re not very comfortable with a microphone. Although I’m a bit high up in the mountains, I’m surrounded by higher mountains and I’m in a kind of bowl. This situation gave me the feeling that the HF bands were not very active in voice and I didn’t look too hard for people to talk to in this mode. 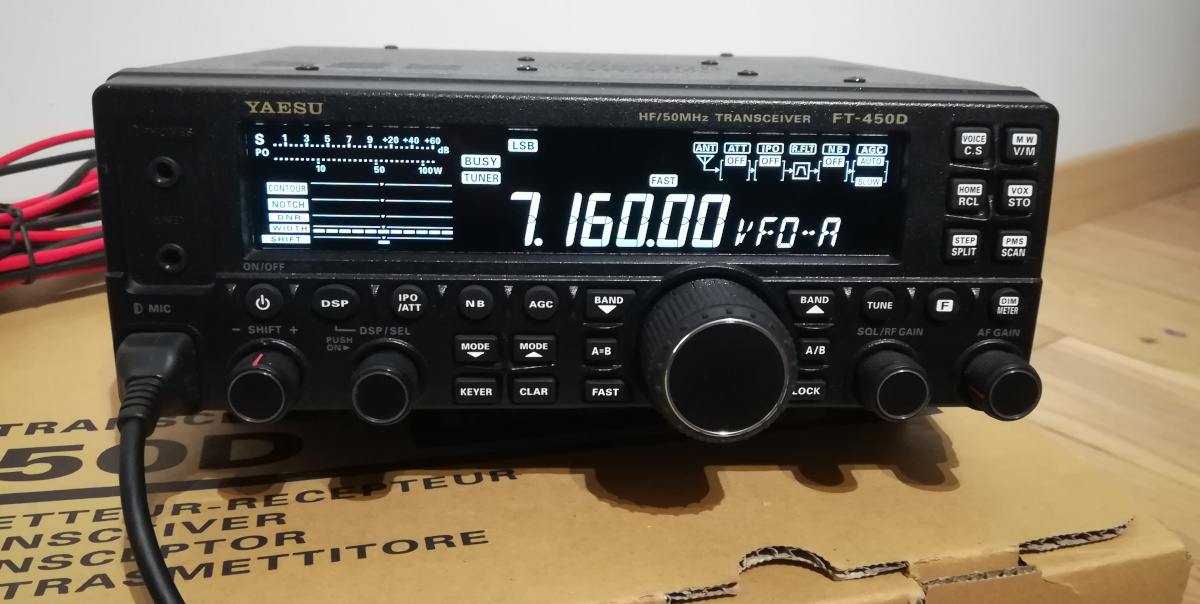 The surrounding mountains made me want to try to climb them with a radio. I couldn’t carry the FT-450D in a backpack, so I bought a small Ukrainian transceiver, a QRPVer-1 v.3 dedicated to the 20m band. This band seemed to me to be a good compromise: rather open during the day, very active at the weekend and not requiring a too long antenna. My first outings at altitude made me discover that this HF band was in fact very active, my little transceiver was receiving dozens of QSOs, and on contest days, it was crazy! I was a bit disappointed: it was difficult with 3 or 4 watts to get a place in this crowd. Having only one microphone, the only mode that was possible was voice. Conclusion: I never managed to make a QSO with this device. 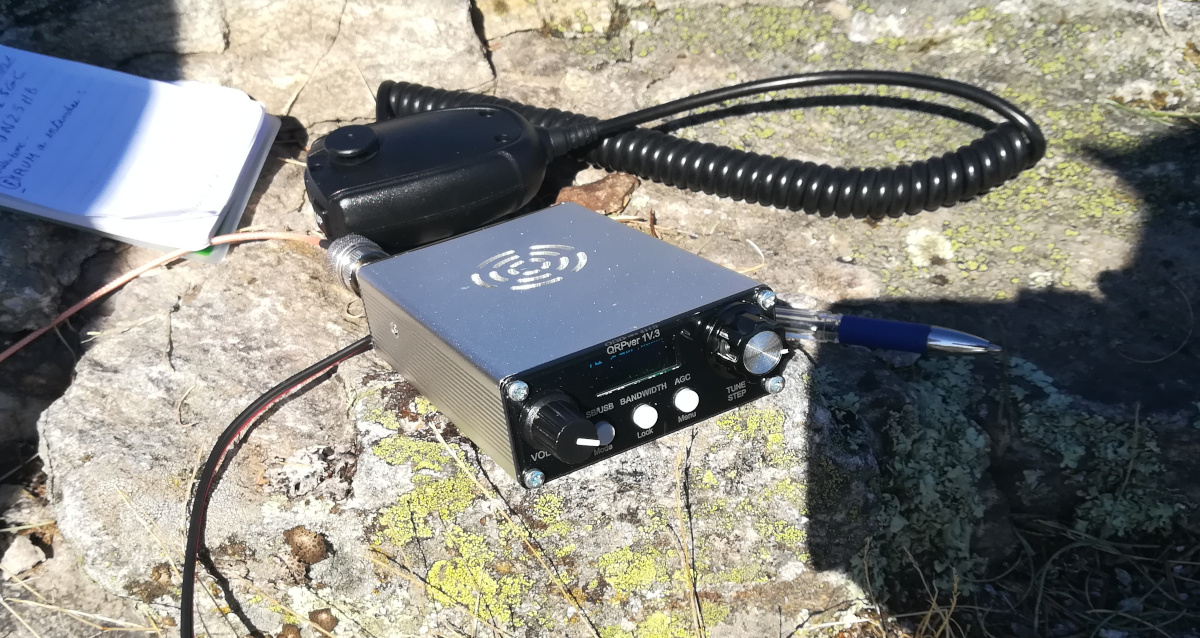 After analysing the situation, I tried to give myself every chance by looking for a new portable transceiver a bit more powerful, open to other HF bands, WARC in particular, to avoid contests which do not interest me at the moment. An SDR and its wide band display also seemed a good idea to easily determine an available frequency to launch a QSO or, on the contrary, to find someone to answer. The Xiegu G90 met these criteria and more with its 20 watts and built-in antenna tuner (ATU) for a very good price. 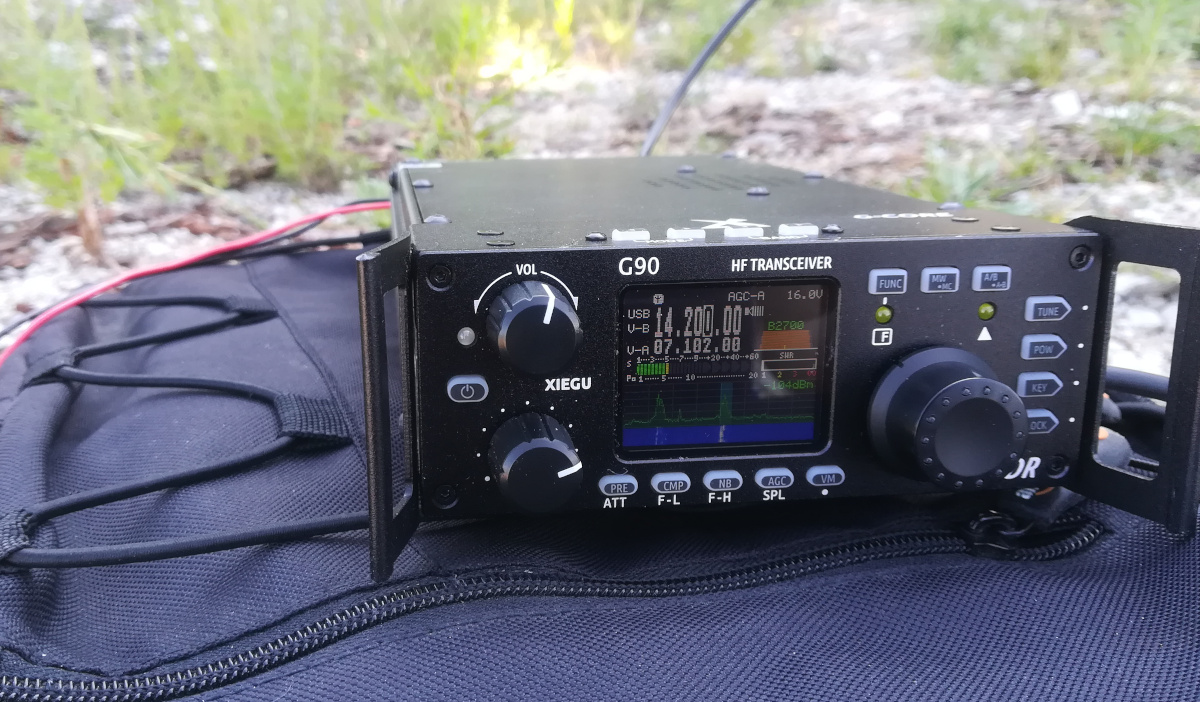 Now it became very interesting to climb a mountain. This device is fabulous. So much so that I decided to use it at the QRA and to plug in a digimode interface to it to take full advantage of this rig. I end up with a versatile device that allows me to efficiently find other stations even from the “bowl” where my QRA is located. I sold my FT-450D and its interface, I didn’t even turn it on anymore. Sure, I lost 80 watts, but I’m having a lot more fun. The SDR display has become a must for me. I’m trying to get into Morse code, and again the waterfall on the G90’s display is great for finding stations that are transmitting.

The 20 watt limitation is still a bit annoying when I’m not on a summit. But to upgrade the station, I will have to make a difficult choice: either boost the G90 with a linear amp and thus an antenna tuner, or buy a new, more powerful transceiver especially for the QRA. I’m looking at several models including the IC-7300, the FT-991A and even the FTDX10. The compromise is complicated, I will give myself a few months, if I can, to make the right choice.

I don’t despair of ever using the QRPVer with a Morse key. It’s still a very good device and maybe its low power won’t be an obstacle in CW anymore.

You can use your Mastodon or Fediverse account to reply to this toot!